Hey Girls, these are the Ultimate First-Move Dating Hacks You’ve Been Looking Fo

Hey Girls, these are the Ultimate First-Move Dating Hacks You’ve Been Looking Fo

Confidence is both the new currency and the new sexy. This 21st century mantra may just be the single spark that has been igniting young Filipinas to fearlessly break barriers these days. It’s what has been pushing them to embrace their flaws and be unapologetically themselves in almost every facet of their lives. As a beauty pageant-loving nation, it’s interestingly fitting to say that beautifully confident (as Miss Universe puts it) is the name of today’s game. 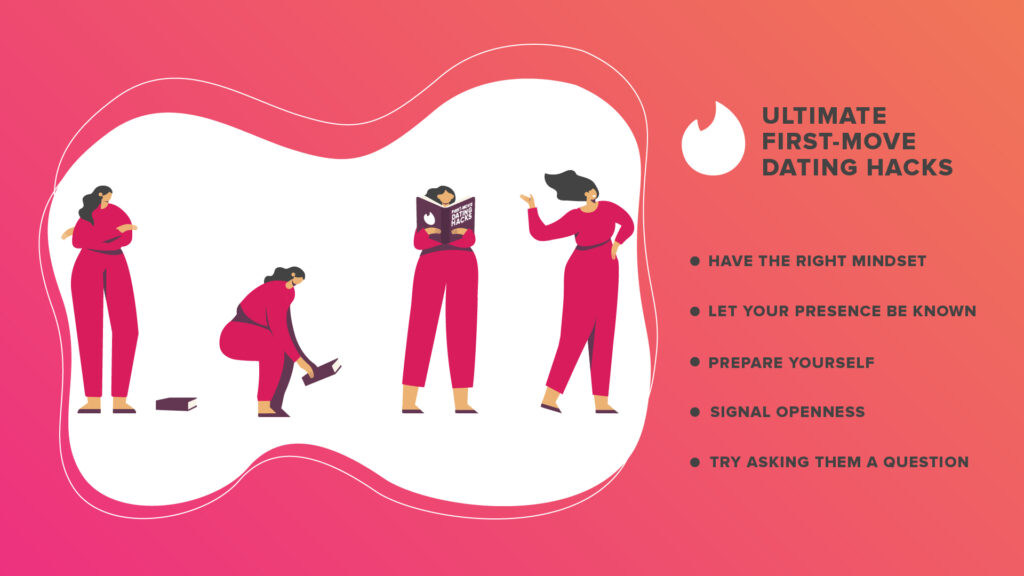 When it comes to dating, however, young adult daters play a different game and tell a whole different story. Tinder found that not everyone is willing to bring out that lady boss vibe in the online dating scene. The world’s number one dating app, Tinder, revealed that 61% of young Filipinas are not keen on making the first move*.

“Tinder today is all about giving every young adult dater easy, safe, and fun ways of making real connections. The recent features on the app like Tinder Explore serve as a light and fun way for young Pinays to initiate conversations, create sparks, and eventually form connections,” Papri Dev, Head of APAC Communications at Tinder said.

Vanessa “Coach Vee” Antonio, a local dating coach and U.S. certified matchmaker, believes that women are more than capable of holding their dating life by the horns. “Women should put themselves out there because they, too, can choose. The moment women realize this, they will naturally have the courage to put themselves out in the world and not leave love to chance”, Coach Vee added.

Tinder teamed up with Coach Vee to come up with these ultimate dating hacks that will allow young Pinay daters to unleash their ‘main character’ energy, make the first move, and eventually take charge of their dating life.

Maybe a visit to Tinder’s Explore page can help you find that courage to start that meaningful conversation–especially if you are connecting with someone who you have lots in common with.

Let your presence be known
You don’t have to be papansin, but women have to open the pathways for matches to have a chance to approach. Let them know you exist by simply saying hi or hello to the person you like. Mere Exposure Effect states that we tend to trust/like the person we often see. By just letting them know you exist, you increase familiarity and give them a chance to continue the conversation and make the second move.

Prepare yourself
Make sure that you are and you look prepared a.k.a. maganda. We’ve seen so many scientific findings around how people feel better from within and make everyone in a room take notice if they present themselves well and in a way that makes them feel confident. So, it makes sense to position yourself this way.

More than anything, preparing yourself means that you have to be confident in all your glory, insecurities included.

Signal openness
Women just need to signal openness. Research has shown that matches need at least five positive signals before they have the courage to approach you – everyone after all worries about rejection! Making sure that your body language projects openness to connection is one strategy to send the message that you are welcoming new people in your life.

An example of signaling openness is to have the courage to smile and smize (smile with our eyes). It is the best “green signal”. Being the dalagang Filipina that we are, many of us are not comfortable being the one to approach. But, in a true young Pinay adult spirit, we can certainly make ‘paramdam’ and let them come to us. Smiling and smizing are the modern ways of dropping that handkerchief. And a powerful eye contact is a key to the heart.

Try asking them a question
Once in a while, you can make use of ‘hero instinct’ to your advantage. This strategy is inspired by a psychology concept called the Benjamin Franklin Effect, which suggests that we tend to like people we have helped or did something for.

Consider sending the first message by asking your match to drop their best adobo recipe, skincare or workout routine.

“I used to feel like I had less of a say, less agency, on how my dating life turned out, because I didn’t know what standards to uphold or boundaries to enforce. Learning the ‘art of making the first move’ has made me capable of saying yes to the dating opportunities that actually suit me, and lead me to more favorable or genuine connections”, said Tinder member Adarrah, 23.

🎶God, it’s brutal out here!🎶 as THE Olivia Rodrigo sings it. But as Coach Vee would say, dating would not be as fun if all the people who go out to meet someone would immediately find their perfect match. What makes dating and love so exciting is the thrill of the unknown, sometimes all you have to do is to take charge.

And speaking of taking charge, hop on Tinder ahora and start shooting your shot with the ultimate dating hacks! This is your dating life. So, go on, sis! Unleash that main character energy.